Inconsistent state-to-state practices and secrecy in vetting health care providers accused or convicted of misdeeds are detailed in a new Milwaukee Journal Sentinel and MedPage Today article: Prescription for Secrecy, is your doctor banned from practicing in other states? State licensing system keeps patients in the dark.

What is the National Practitioner Data Bank? While a member of the public cannot look up a provider, we can get an idea of how Wisconsin is doing as a whole. 2016 saw 525 medical malpractice and adverse action payments in Wisconsin.
Posted by Brenda Fay (webmaster) at 4:18 PM No comments:

Why do we love our families? Is it as simple as C r x B?

TED-Ed has a new rival for my favorite web series. PBS Digital Studios has a great group of online programs. One of my favorites is "It's Okay To Be Smart". This episode looks at why we love our families. Can this formula help us understand? C r x B

Posted by Brenda Fay (webmaster) at 9:11 AM No comments:

WPR is usually on during my morning drive time. This morning on Kate Archer Kent's radio show, she interviewed Dr. Noelle LoConte, who talked about a new BMJ study on processed foods and cancer. Listen here.


Posted by Brenda Fay (webmaster) at 9:30 AM No comments:

How 19th century surgery was made safer: The Butchering Art

Joseph Lister had a mission: to decrease the amount of people that died after being operated on. He succeeded, but it was a long, long journey.

Posted by Brenda Fay (webmaster) at 8:28 AM No comments:

I first heard about Atul Gawande from a geriatrician who was looking for the source of Atul's data for this New Yorker article: The cost conundrum, what a Texas town can teach us about health care. I emailed Mr. Gawande and he promptly replied with the source of the data, the Dartmouth Health Atlas. Ever since then, I've followed his career and always felt grateful to him that he emailed back a librarian!

Posted by Brenda Fay (webmaster) at 8:58 AM No comments:

Making viruses more lethal - should there be oversight?

Late last year, the New York Times published an article about a CDC research moratorium being lifted. One of the questions raised in the article is about who, if anyone, should have oversight on this type of research.

But the new regulations apply to any pathogen that could potentially cause a pandemic. For example, they would apply to a request to create an Ebola virus transmissible through the air, said Dr. Collins.

There has been a long, fierce debate about projects — known as “gain of function” research — intended to make pathogens more deadly or more transmissible.

In 2011, an outcry arose when laboratories in Wisconsin and the Netherlands revealed that they were trying to mutate the lethal H5N1 bird flu in ways that would let it jump easily between ferrets, which are used to model human flu susceptibility.


Tensions rose in 2014 after the Centers for Disease Control and Prevention accidentally exposed lab workers to anthrax and shipped a deadly flu virus to a laboratory that had asked for a benign strain."

Read more of the article here. 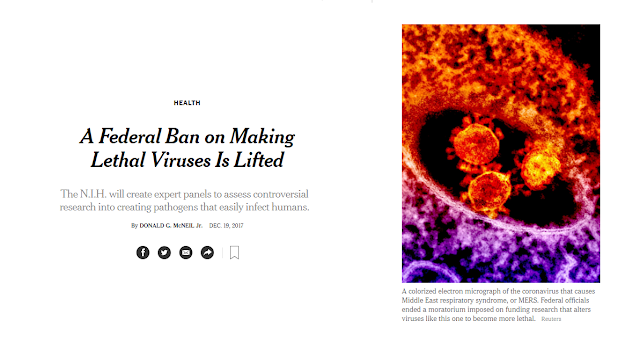 Posted by Brenda Fay (webmaster) at 11:04 AM No comments:

Fetal kicks pack a punch in the womb - 45 newtons worth!

Babies are mostly bright eyes and fat rolls, but don’t be fooled. Those rotund legs pack a powerful punch—more than 45 newtons (10 pounds of force)—according to the first study ever to measure babies’ kicks in the womb. To quantify fetal brawn, scientists built computer models from MRI scans that tracked the movements of fetuses from 20 to 35 weeks (above). They found that the kicks become stronger from 20 to 30 weeks. But after 30 weeks, kick force plummets, likely because the fetuses have less and less room to move around as they grow. The kicking exercises benefit babies in two ways, the researchers say: First, it’s literally exercise, which helps develop muscles and bones. Second, the effort increasingly strains joints from mid- to full-term. That strain likely helps their joints form properly, the scientists report today in the Journal of the Royal Society Interface; having normally shaped joints could prevent osteoarthritis later in life.

Posted by Brenda Fay (webmaster) at 9:54 AM No comments:

This Tuesday's blog post comes to us from TED Radio Hour, which recently aired a show on re-imagining medicine. Part 1 features Siddhartha Mukherjee...have a listen.

"About Siddhartha Mukherjee's TED Talk
When it comes to medicine, one rule of thinking has generally prevailed: Have disease, take pill, kill something. But physician Siddhartha Mukherjee says treatment should take a broader approach.
About Siddhartha Mukherjee
Siddhartha Mukherjee is a cancer physician and researcher, and an Assistant Professor of Medicine at Columbia University Medical Center.
He is also the best-selling author of many books, including the Pulitzer Prize-winningThe Emperor of All Maladies: A Biography of Cancer, The Laws of Medicine, and The Gene.
He collaborated with Ken Burns on a six-hour documentary for PBS based on The Emperor of All Maladies, updating the story with recent discoveries in oncology."
Posted by Brenda Fay (webmaster) at 8:56 AM No comments:

Get your creativity on: Library and museum coloring books

Coloring books for grown-ups have been all the rage these past couple of years. Not do be outdone, libraries and museums have joined in the fun. Below you'll find links to images of animals, literary characters, maps, and even the occasional unicorn. 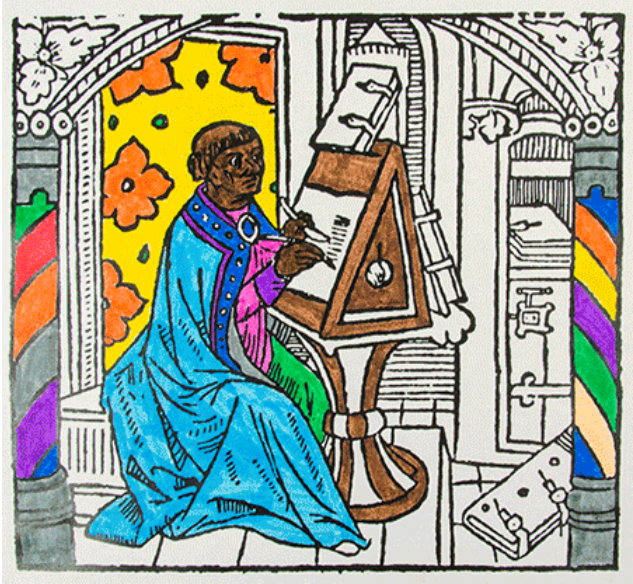 Posted by Brenda Fay (webmaster) at 8:25 AM No comments: