In celebration, the State Library of Queensland, Australia made this fun video to remind you to back up and preserve your data:

Library Journal's 2019 Books of the Year

Library Journal has published its list of the Best Books of 2019.  Have you read any of their picks?  Are there any outstanding books you've read that didn't make their list?  Let us know in the comments or send me an email at annie dot lipski at aurora dot org.  I'll start us off by saying I recently finished the audiobook version of The Lager Queen of Minnesota and really enjoyed it.  Thanks to my first semester of grad school, I haven't had as much time for recreational reading as I'd like, but winter break is fast approaching, so let's hear your recommendations! 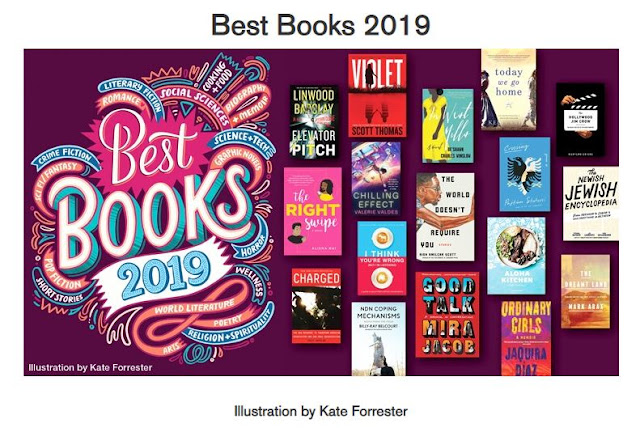 If you haven't already seen it, here's the latest update on the EFTS re-make by MLA.

> Be sure to sign up for a NEW EFTS user agreement, so they know if they will have the minimum number of participating libraries to make the new program viable and sustainable.


Posted by Michele Matucheski, Ascension Wisconsin Librarian at 11:45 AM No comments:

Some of you might remember Liz writing about her experience as part of MLA's RTI group last year. This research project stemmed from her participation in that group.

Liz and her team analyzed citations from the now retracted 1998 Lancet  article by Wakefield which suggested a causal relationship between vaccines and autism.


In addition to the JAMA Network Open article, Liz was featured on Retraction Watch yesterday and went into more detail about what her team discovered and recommendations for working to minimize the lack of retraction's in citation styles and citation management software.

Read more in the press release below, courtesy of Medical College of Wisconsin.

Milwaukee, Nov. 15, 2019 – A study published today in the online medical journal JAMA
Network Open shows that despite complete retraction, a 1998 article that purported to show an
association between the measles-mumps-rubella vaccine and autism continues to be cited in
scholarly works and was the ninth-most cited scholarly publication indexed on the topic of
autism.

The six researchers from southeastern Wisconsin health science libraries reviewed more than one
thousand English language, scholarly book chapters and articles from peer-reviewed publications
that cited the 1998 article by Wakefield et al that claimed to show a link between the vaccine and
autism. This study was partially retracted in 2004 and completely retracted in 2010, yet it
continues to be cited in scholarly works.

The investigators examined the context of how scholarly authors cited the study by Wakefield et
al and how, if at all, the retracted status of the study was identified in the work or reference list.
The librarians’ analysis found that most authors cited the Wakefield et al article in a negative
manner, meaning they disputed or questioned the study, and several citing works failed to
identify the study’s retraction.

“Our findings demonstrate that a high citation count for a study does not necessarily mean high
quality work, and that failing to note if a cited study has been retracted can leave readers with a
misperception that the data and conclusions found in the retracted paper are valid,” said lead
author Elizabeth Suelzer, MLIS, AHIP, from the Medical College of Wisconsin (MCW)
Libraries. “Our investigation uncovered significant obstacles that may contribute to the problem
of authors failing to identify retracted works in their bibliographies. Ultimately, each author is
responsible for accurately noting a retracted article in their references, but improvements can be
made by publishers, bibliographic databases and citation management software to facilitate the
recognition and documentation of retracted studies.”

About the Medical College of Wisconsin

With a history dating back to 1893, The Medical College of Wisconsin is dedicated to leadership
and excellence in education, patient care, research and community engagement. More than
1,400 students are enrolled in MCW’s medical school and graduate school programs in
Milwaukee, Green Bay, and Central Wisconsin in. MCW’s School of Pharmacy opened in 2017.
A major national research center, MCW is the largest research institution in the Milwaukee
metro area and second largest in Wisconsin. In the last ten years, faculty received more than $1.5
billion in external support for research, teaching, training and related purposes. This total includes highly competitive research and training awards from the National Institutes of Health (NIH). Annually, MCW faculty direct or collaborate on more than 3,100 research studies, including clinical trials. Additionally, more than 1,600 physicians provide care in virtually every specialty of medicine for more than $2.8 million patients annually.

If you have something to say, let your voice be heard!

Posted on behalf of WHSLA Member and Secretary, Barb Ruggeri,
Posted by Michele Matucheski, Ascension Wisconsin Librarian at 9:30 AM No comments:

New Article on the Value of Medical Libraries 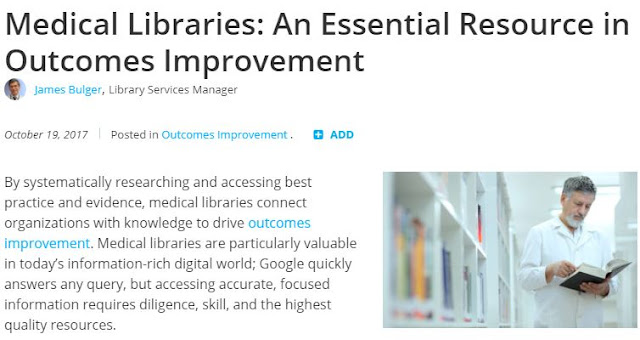 New Article on the Value of Medical Libraries in Health Catalyst.

It includes a set of ppt slides and links for additional reading.

> Great ways to share the value of what we do for our organizations!

Posted by Michele Matucheski, Ascension Wisconsin Librarian at 8:32 AM No comments:

The Charleston Conference is an annual conference of librarians, publishers, electronic resource managers, consultants, and vendors of library materials held in Charleston, SC. The conference is the premier event to discuss issues in book and serials acquisitions, but there are many related topics like scholarly communications, copyright, and open educational resources discussed.  This year’s conference was held November 4-8, 2019.  The theme was “The time has come… to talk of many things!” I attended with the support of a WHSLA professional development award.  I attended many interesting sessions, but I’d like to report on just a few of the ones that were most compelling or entertaining for me.

The opening keynote was “Building Trust when Truth Fractures” by Brewster Kahle, Founder and Digital Librarian of the Internet Archive.  Brewster demonstrated how information in Wikipedia is biased toward things you can click on and get to right away.  This means that we really leave out a lot of stuff.  He wanted to help and fixed over 10 million broken links in Wikipedia.  Additionally, relatively speaking, there is not much book content from the 20th century available online.  He approached Better World Books for help.  He announced that he set up a nonprofit called Better World Libraries, an affiliate of the Internet Archive with a vision to set up controlled digital lending of digitized books to improve access to information for all.  Read more about this at https://blog.archive.org/2019/11/06/for-the-love-of-literacy-better-world-books-and-the-internet-archive-unite-to-preserve-millions-of-books/.

“Anticipating the Future of Biomedical Communications” was presented by Patricia Flatley Brennan, Director of the National Library of Medicine. Patti spoke about what NLM is doing to promote 21st century biomedical communications.  She elaborated on issues including improving usability of and access to the research literature, promoting open science and data sharing, and guiding 21st century communication.  She also announced a pilot NLM plans to undertake to index the preprints of NIH-funded studies posted to bioRxiv.

I also attended a session called the “Hyde Park Debate.”  The proposition to be debated was “Resolved: Preprint servers have improved the scholarly communication system.”  Oya Rieger of Ithaka S+R, formerly of arXiv, argued in favor of the proposition, and Kent Anderson (Caldera Publishing Solutions) argued against it.  Arguments in favor of preprint servers are that preprints enable rapid communication and provide a defense against scooping, level the playing field, and allow dissemination of work not normally reported in journals such as negative results.  Arguments against preprint servers are that preprints push out preliminary and untested results, confuse the public, and fool journalists into reporting on unvetted findings.  Kent offered ways to make preprints function better including keeping the servers closed to the general public and keeping the preprints from getting DOIs.  The debate was lively and ultimately Kent Anderson was declared the winner of the debate.

Another fascinating session titled “A New Sense of Campus Privacy? Are Libraries Out of Step?” discussed how librarians need to rethink what privacy means in our current society.  In a world where trace DNA collected from discarded cigarette butts can be used to recreate the faces of strangers, technology is outpacing our ability to keep information private. In respecting user privacy, we regularly give up advancements in user experience. Libraries can improve services and demonstrate our impact by collecting data on our users that we previously would not.

Lastly, I attended a session called “The Long Arm of the Law.”  Michelle Wu, Associate Dean for Library Services and Professor of Law, Georgetown University Law Center spoke about Controlled Digital Lending (CDL) as a strategy to increase accessibility and preservation of library collections.  She outlined the legal basis for CDL and demonstrated how libraries may digitize print copies of a book as long as there is only the same number of copies that it has legitimately acquired, usually through purchase or donation, in print plus digitized. William Hannay, Partner, Schiff Hardin LLP is a regular speaker at the Long Arm of the Law session.  He reported on various legal cases regarding copyright infringement or intellectual property rights. He finished his presentation with a humorous parody of Lil Nas X’s song “Old Town Road” to show his contempt for the results of a court case against Katy Perry.  His humorous approach to the usually dry topic of copyright was a surprising delight.

Watch the Long Arm of the Law session online at https://www.youtube.com/watch?v=7iyHmOJJlUE&feature=youtu.be.

Posted by Brenda Fay (webmaster) at 3:08 PM No comments:

The Healing Nature of NLM’s Herb Garden
[Re-posted from the NLM's Musings from the Mezanine Blog, Oct 1, 2019]

Guest post by Kathryn McKay, writer-editor at the National Library of Medicine  Stressed? Perhaps the scent of lavender or the sight of flowers could soothe you. That’s what a group of gardeners have discovered while tending to the NLM Herb Garden. “When the herbs grasp your soul, you can’t just walk past them,” says Pat Keeney, …

Posted by Michele Matucheski, Ascension Wisconsin Librarian at 8:38 AM No comments:

Our Fall Board meeting took place this morning. One of the items on the agenda was to announce the 2020 President-Elect.

I'm happy to share that Ashley Zeidler, Reference Librarian at Medical College of Wisconsin Libraries, has been elected to that position.

Ashley will be mentored by incoming WHSLA President Holly Egebo and also become a voting member of the board.


Posted by Brenda Fay (webmaster) at 8:52 AM No comments:

4 Tips for Marketing Your Digital Library

4 Tips for Marketing Your Digital Library
This a brief article by Liz Lorbeer from The Wiley Network’s newsletter for Librarians.

1) Your Marketing plan should reflect the Library’s mission.
2) Make a list of skills that will make your users successful library consumers.
3) Cultivate users to be Library Champions.
4) Study the behaviors of users to measure success.

I know I’ll be taking some of these ideas to heart in the coming months as we re-shape our own marketing plan for Library Services at Ascension Wisconsin.

Posted by Michele Matucheski, Ascension Wisconsin Librarian at 9:36 AM No comments:

It's November 1st and that means it's time for NaNoWriMo!  During the month of November, writers all over will try to write 50,000 word novels in just thirty days!  Sign up and join in on the fun!