As promised, here's a longer book review.  Thanks to WHSLA Treasurer Robert Koehler for the following:

In Killers of the Flower Moon, David Grann focuses on what became know as the “Osage Reign of Terror.” Officially taking place from 1920 through 1924, during this period members of this Oklahoma Indian tribe began to be killed: some murdered outright, many others dying under mysterious circumstances. Ineffectual, and often incompetent, local law enforcement failed to make any headway in finding who was responsible for the murders. This is not surprising since many were bribed to turn a blind eye. Desperate, the Osage finally convinced the Federal Bureau of Investigation to take on the case in 1924. Newly appointed as director of the agency, a young J. Edgar Hoover was eager to do so, feeling that if the case could be solved, it would bolster his credentials and win greater respect for the Bureau at a time when it was still fairly new and poorly funded.

Grann details the ensuing investigation, which reads like the plot of a first class detective story. And typical of such stories, Killers of the Flower Moon has a surprising twist even after the series of murders was seemingly solved.

This book brings to light a shameful chapter in American history. It documents how the lust to acquire the Osage wealth led highly respected members of the surrounding white community to turn to murder to achieve their ends. This story of blatant racism, greed, and corruption should be included in every school textbook. Killers of the Flower Moon is an indictment not only of the criminals involved, but of an entire culture that fostered such an activity. 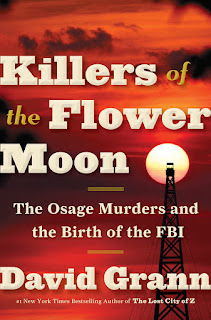