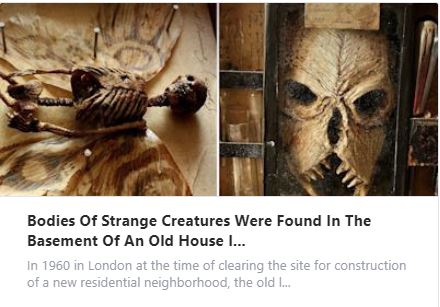 In the vein of pickled heads and curiosity cabinets, I find this exhibit absolutely fascinating ...  even more so because he made everything look like actual dried and preserved specimens.  Yes, I am assuming an artist created all these creatures, and the story to go along with it, or we'd have seen other such specimens in other collections.  The stuff of nightmares.  Other realms.

And still-- there's a part of me that wants to believe, and a part that is terrified--when you see all those teeth, or a fetus skeleton with antlers on its skull.

A little like the nightmares out of Miss Peregrine's Home for Peculiar Children or Alice Hoffman's Museum of Extraordinary Things.

Read the comments at the end.  They are fascinating too ...  Makes me think about world-building and imagination, and ecosystems of information and mis-information, too.

Maybe this would have been better for Halloween, but it was too good to hold onto until then!

Posted by Michele Matucheski, Ascension Wisconsin Librarian at 10:26 AM