You might know me as WHSLA’s “appointed for life” Treasurer.  However, I do have a day job.  For the past thirty-two years I’ve been a librarian at Meriter Hospital (now known as UnityPoint Health-Meriter).  During this time I have survived several hospital mergers, my library has been relocated a number of times, and my staff has been downsized.  As we all know working in the health care sector, there is rarely a dull moment.  I became Chief Librarian at Meriter in 1991 and then found myself the head of a one-person library in 2010.  Fortunately, I have had the help of many a university work-study student, as well as backup support from the Medical Staff Services Division, the unit I’m part of in the hospital.

My main responsibilities center on the library, but I’m also involved in several activities that expand my horizons.  I participate in coordinating the delivery of patient education throughout the organization.  I teach reflective journaling classes four times a year to newly employed nurses and am an active member of the Nursing Research Council.  We also have a Narrative Medicine Committee at the hospital, which I chair.  Twice a year this committee sponsors a “Meriter Reads” event.  We choose a popular book with a health care theme and encourage the entire organization to join us in reading it.  An informal session is then held to review and discuss it.  Occasionally, we have brought in authors as well to talk about a pertinent book they have written.

I grew up in northwestern Wisconsin in Bloomer, “the Rope Jumping Capital of the World.”  Before getting my degree at UW-Madison, I spent some time roaming the world: hitchhiking around the U.S. for several years, as well as living in England.  I graduated with my MLIS in 1980.  I’ve been happily married for 30 years to a former librarian some of you may know or remember, Jackie Pratt.  She worked for a good many years at the UW Health Sciences Library.  My hobbies include running, biking, gardening, and writing.  I have a blog, Robert Up At Dawn, where I post my poetry and reviews of books. 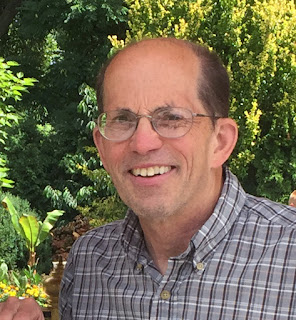