Congratulations to Liz Suelzer, recipient of the 2020 WHSLA Librarian of the Year Award!
Join us in congratulating Liz on this well-deserved accomplishment. Read the nomination form below, submitted by Karen Hanus and Barb Ruggeri, to learn more about Liz's work. 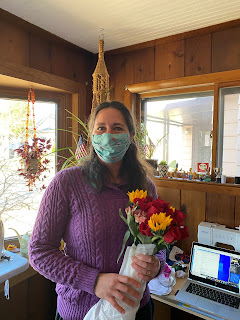 We nominate Elizabeth (Liz) Suelzer, as WHSLA Librarian of the Year in recognition of her efforts in the research of citation behavior around retracted articles.  Liz applied to the inaugural Medical Library Association Research Training Institute (RTI) Class of 2018 and she was selected for inclusion from a large field of applicants.  After the week long instruction to improve her skills in research design and planning, she developed her research proposal.  The research was to examine the citations of the infamous retracted 1998 article by Wakefield, which remains one of the most highly cited articles in the topic area of autism.   Always very collaborative, she invited Southeastern Wisconsin health science librarians to work with her on the project.  Liz lead a team of 6 librarians from 3 institutions to analyze the citation behavior of over 1100 articles which referenced the retracted Wakefield article.  Along the way she evaluated review software and customized an interface that enabled the six reviewers to nimbly read and code the articles.

Shortly after the results were obtained, she forged ahead with leading the writing of a manuscript.

In just a little over a year following her attendance at the RTI, the research project was carried out, the manuscript written and accepted by JAMA Network Open.   The article received international attention, scoring in the top 5% of all research outputs scored by Altmetric.  The article examined the characteristics of citations of the retracted 1998 article by Wakefield et al that purported to show an association between the measles-mumps-rubella vaccine and autism, and Liz and her team found that the citation characteristics were mostly negative, but since the notice of retraction was issued in 2010, many of the citing works published afterward did not indicate that the article was retracted.  Liz and her team called for improvements from publishers, bibliographic databases, and citation management software to ensure that retracted articles are accurately documented.  She has been interviewed by Retraction Watch blog and also provided commentary to Nature https://www.nature.com/articles/d41586-020-01324-6  on SCITE.ai and how it tracks positive and negative citations for COVID-19 literature.

Liz has also served WHSLA in several capacities. She was one of the association’s professional development coordinators for several years and she helped devise and coordinate how our WHSLA members can access a variety of MLA programming. During the time of her research project, she also was chair of the publicity committee for 2019 Midwest Chapter of MLA, WHSLA & SWHSL meeting held in Milwaukee in October 2019.

For researching a critical issue in scholarly communications, raising the profiles of health science librarians’ contributions in research, and fostering education for WHSLA members, we ask that Liz Suelzer be recognized as WHSLA’s Librarian of the Year, 2020.  Liz’ impressive professionalism, innovation, and collaboration deserve to be recognized by her peers. 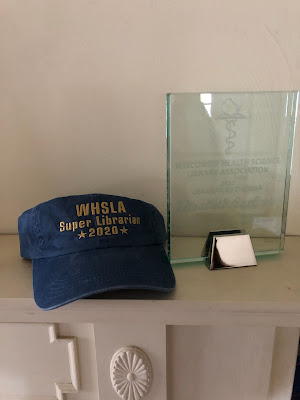 Email ThisBlogThis!Share to TwitterShare to FacebookShare to Pinterest
Labels: Librarian of the Year, WHSLA